We were at the world’s most enviable workplace, allegedly, but were repeatedly reminded that we would not be hired full-time and were not part of the club. Technically, we were employees of a legal staffing agency whose staff we’d never met. We didn’t get sick leave or vacation and earned considerably less than colleagues with the same qualifications who were doing the same work.
— Read on qz.com/1494111/googles-caste-system-is-bad-for-workers-and-bad-for-google-too/

Sounds like Google is Uber for office workers. It does not appear to help create a very conducive culture all around.

I work remotely but feel a sense of culture that most of my office jobs have not had. Being fully employed is a big part of this as it gives one level of equality. Open meetings with the entire company is critical. Free access and encouragement to speak freely with anyone on the company is also critical. Companies and cultures die in silence.

While I might miss some water cooler banter I am also missing the micro aggressive non-verbal bullshit that is constantly rampant in any office space. Since I work for the work and not the social ness of my workers this seems like a good trade off.

Yes I like my coworkers and think I would probably hang out with most of them if we lived near each other. However I spend enough time outside of work to have a healthy social life. 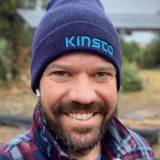 Roger lives fulltime in a 2008 Jayco Travel Trailer with his wife Kate and their dog's Dazey and Enzo. He works fulltime but is open to early retirement anytime.